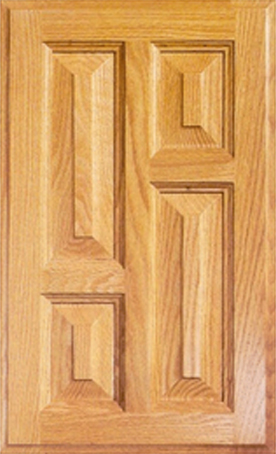 Raised Panel doors offer an added dimension to your cabinetry design. Center panels are created with a variety of profiles, from stylishly simple to quite complex. These doors work well in a more formal or traditional setting, and are an excellent choice if you would like the cabinetry to be a focal point of the room.

Oak is the most widely used hardwood. There are more than 60 species of oak grown in the U.S., which can be separated into two basic varieties; white and red. The red variety is also known as black oak (a reference to its bark).

There are 115 species of maple. Only 5 commercially important species grow in the U.S. Two of the five are hard rock maple and sugar maple.

Cherry is grown in the Eastern half of the U.S.. It is sometimes called fruitwood. The term fruitwood is also used to describe a light brown finish on other woods.

There are many different grades and species sold under this name, which vary widely in quality and price. Mahogany which comes from the Caribbean is thought to be the hardest, strongest and best quality.

There are many species of birch. The yellow birch is the most commercially important. European birch is fine grained, rare and expensive.

There are 15 species of hickory in the eastern United States, eight of which are commercially important.

There are 16 species of ash which grow in the eastern United States. Of these, the white ash is the largest and most commercially important.

We are always looking to bring something new to the table to give your cabinets a fresh new look.

Find Us On Map

get in touch with us